The Year of Ringo. a loving tribute by Rob Stull

Mike Wieringo > News > The Year of Ringo. a loving tribute by Rob Stull

The Year of Ringo. a loving tribute by Rob Stull

The year of RINGO 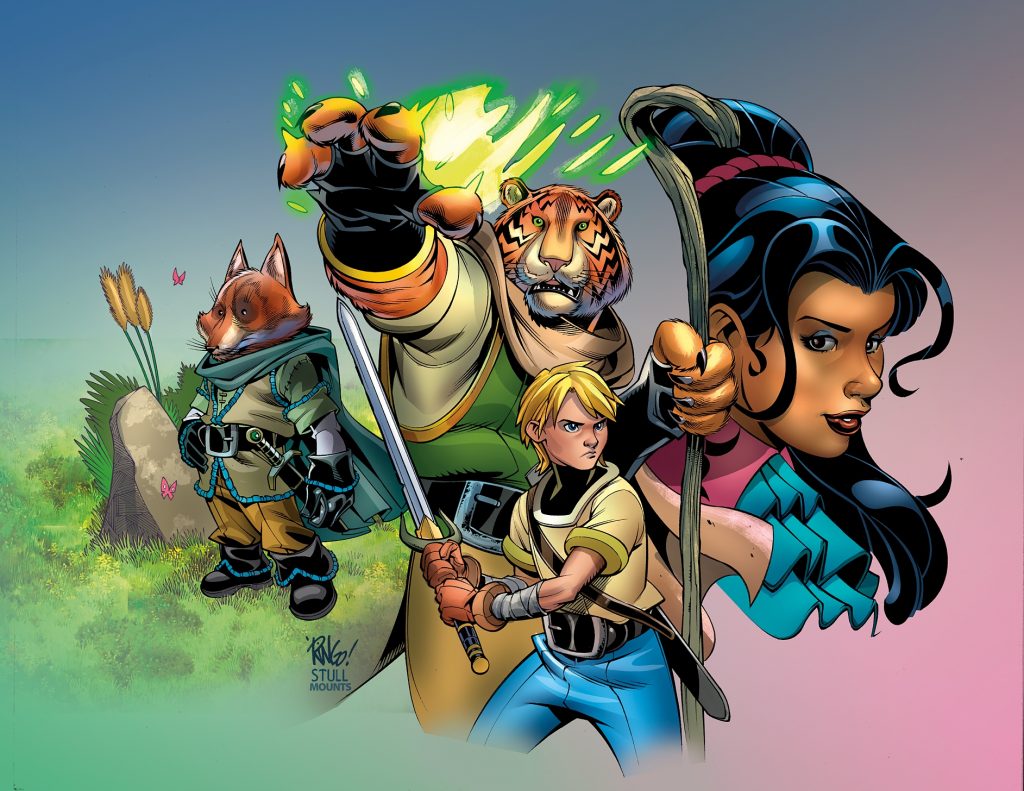 10 years ago the comic book industry lost a legend, and many of us in the professional community lost a friend. Mike Wieringo was an Artist that drew comic books. And he drew them exceptionally well. However, to simply refer to him as a comic book artist or a penciler would not be sufficient. In my opinion, the best writers, pencilers, inkers and colorists, can write, pencil, ink and color…or should at least have a solid understanding of the entire process of comic book creation. Sequential Art is a story-telling medium. Mike Wieringo was a master story-teller. And 2017 was, without a doubt, the year of RINGO.

As an Artist that inks comic books, I’ve collaborated with Mike many times over my 20-plus years working as a professional in the comic book industry. TELLOS was Mike’s creator-owned project with co-creator, partner and writer Todd Dezago. I was part of the original Tellos creative team and inked Mike’s pencils on the initial 10-issue series run. Paul Mounts and Ken Wolak of Bongotone provided the amazing color. Sometimes individual creators get thrown together on a new project and “mesh” over time. Sometimes they don’t mesh at all. I can honestly say, even after all this time, we knew we had something special…

“In all our years, nothing is more rewarding or enjoyable than TELLOS. Mike and Todd are two of the finest people I’ve ever met, and Ken and I feel lucky to have been allowed to apply our trade on such a great project. I think that with Todd’s scripting, Mike’s incredible pencils and Rob’s inks (in my mind one of the two or three BEST inkers in the industry—Bravo, Rob!), we all form one of the strongest teams in comics today.” – Paul Mounts (’00) 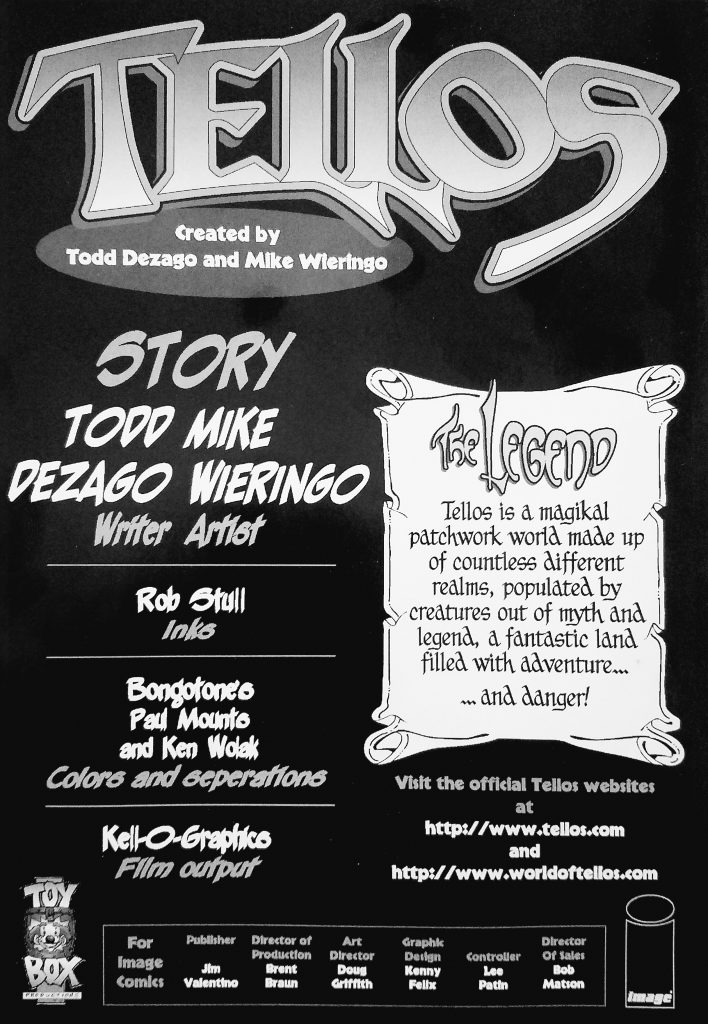 “Comic books, for the most part, are a collaborative art form. If I were to look back on the books I enjoyed as a child, I would recall a sense of care and attention to detail in the visuals that got me hooked from the beginning. That’s no accident. In fact, it’s the very same feeling I felt each and every time I worked with Mike. He had me hooked from the beginning. As collabs go, each artist is a complement to the other. The penciler complements the writer, the inker complements the penciler, and the colorist complements everybody. When artists work together, who have a mutual love, respect, admiration and appreciation for each other’s abilities, you get beautiful work. Period.” – Rob Stull (’07) 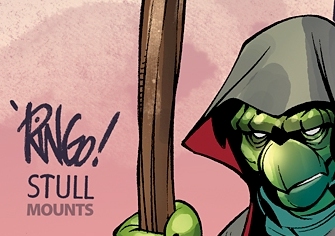 In August of 2007, I received the news that Mike had passed away. Overcome with shock (he was only 44) and sadness, I immediately began drawing. Don’t know why, just started drawing. No clear idea or concept in mind, no preliminary sketches, none of that. All I remember is that I stayed in the moment of the deep sadness I was feeling, ultimately producing a very somber piece. I wanted to draw myself as I believe Mike would have, if I were a character that existed in the Tellos Universe. So, the guy at the drawing board is me. The light in the background is Mike’s spirit and the folks surrounding me are characters from the book. It conveyed what I was feeling at the time, and that’s what I needed it to do. It was personal. My tribute to Mike long before any official tribute was ever announced. I had no intention of ever showing it to anyone, other than close friends.

Speaking with Todd Dezago a short time later, we confirmed that we all (the professional comic book community) were feeling a sense of loss, and the desire to do something special in Mike’s honor. What followed was a series of independent efforts in the form of tributes over the years. But something much bigger was on the horizon, and it was important that it be kept a “secret.” 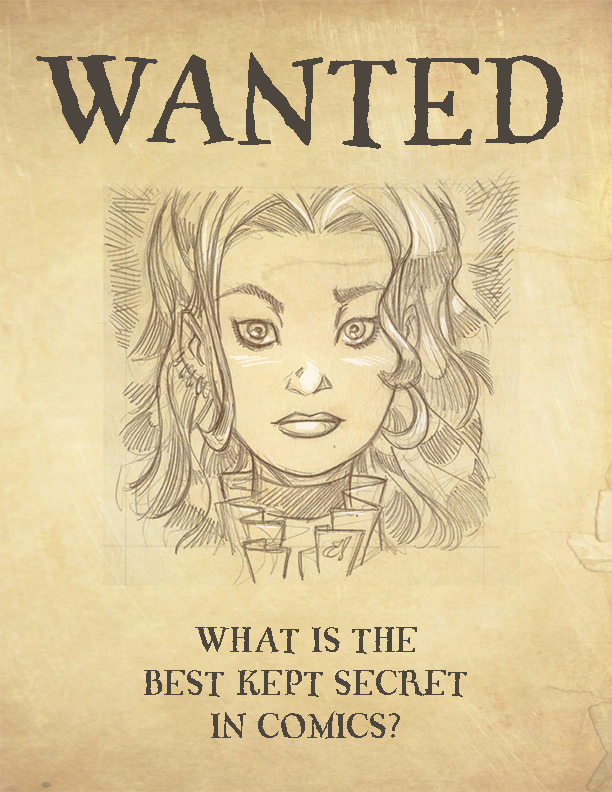 Todd, whether he realizes it or not, is one of my closest friends in the industry. I’ve always considered the Tellos crew as my brothers and extended family. So, when he and I first started talking about a serious tribute to Mike, a little over 3 years ago, I was all-in from jump. 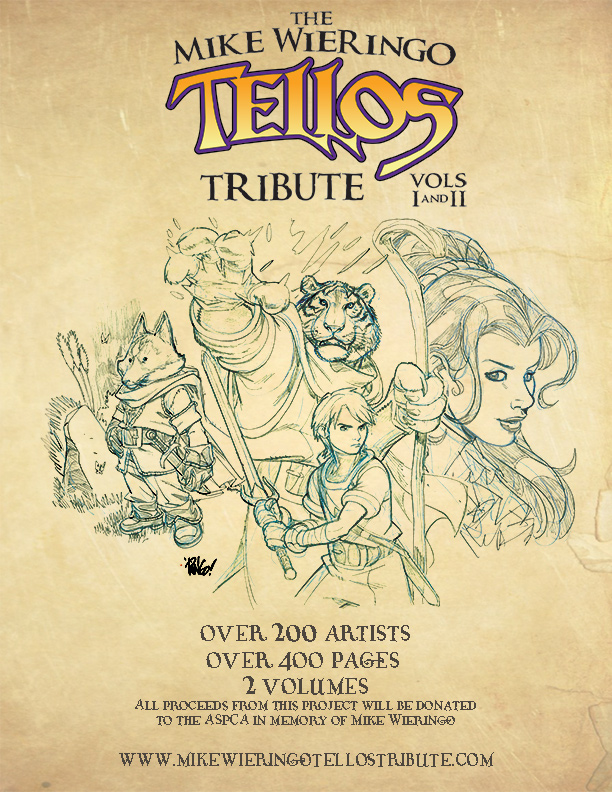 We would call ourselves ‘The Secret Friends of Ringo” and everything we did, in regard to this project, would be…a secret. We were not to tell anyone. And for the most part, we didn’t.

What Todd accomplished with this massive two volume hardcover tribute was an amazingly beautiful and unprecedented thing. The job of an editor is never easy. Yet somehow, he was able to write 500 pages of content, manage the individual progress (and personalities) of over 200 incredible contributors, put it all on a schedule and get it done! The Mike Wieringo Tellos Tribute is an historic outpouring of respect, appreciation, gratitude and love for our brother in art. And it all came together to properly commemorate the 10 year anniversary of his passing. 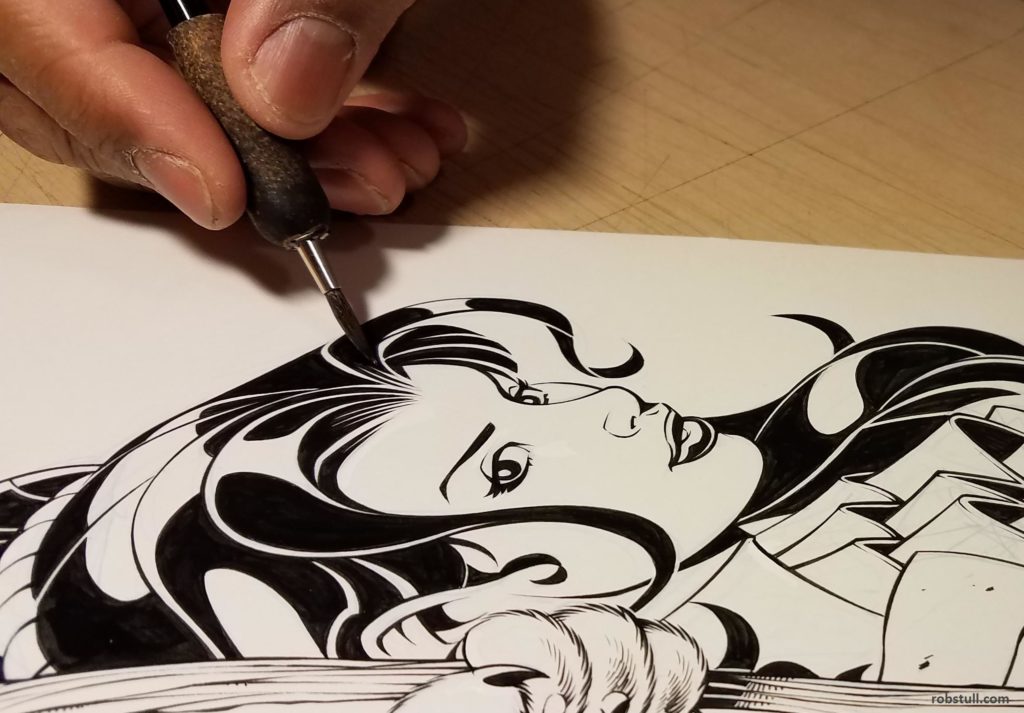 I had the honor of penciling and inking a chapter in volume 1, in addition to providing inks for both tribute covers. The covers were a reuniting of the original Tellos team. I got the chance to collaborate with Mike and Paul again! We used a variety of Mike’s old Tellos sketches and pieced them together with the aid of photoshop (and Craig Rousseau) to create a collage type of style. They were then printed onto comic art boards for the physical “blue line” pencil art that I would use to ink. 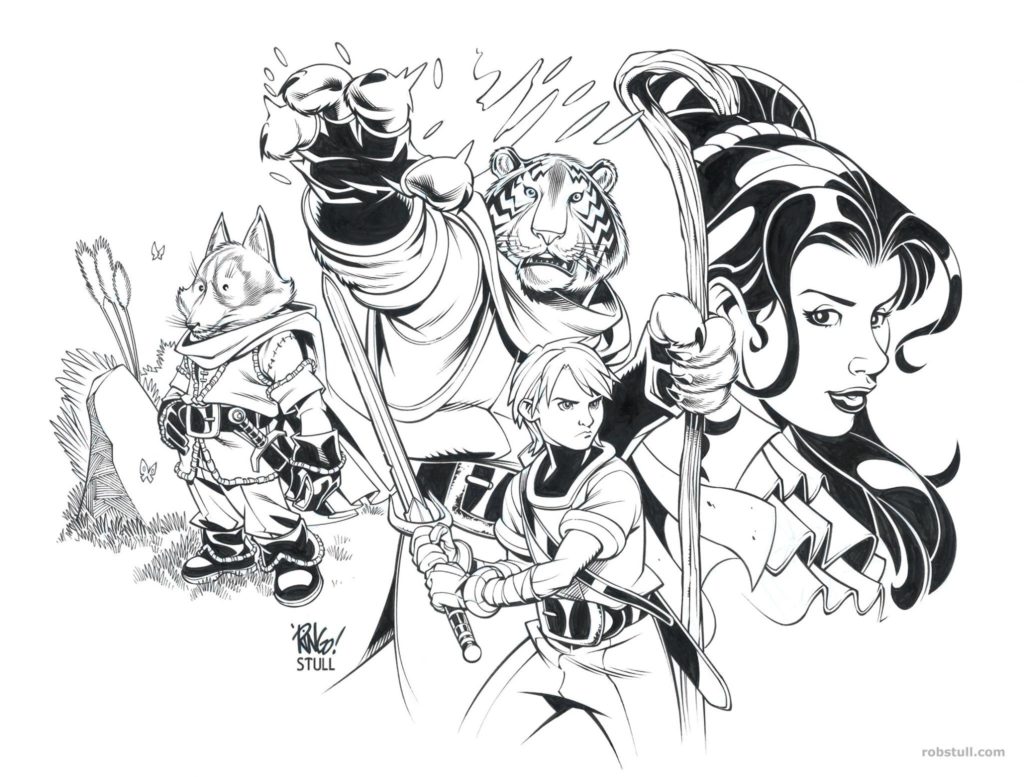 Once the inking was completed…

…Paul Mounts worked his Magic! Paul is one of the best in the industry, and has been for many years. Always in demand and always very busy. If you’ve ever collaborated with him you are among the fortunate and blessed. 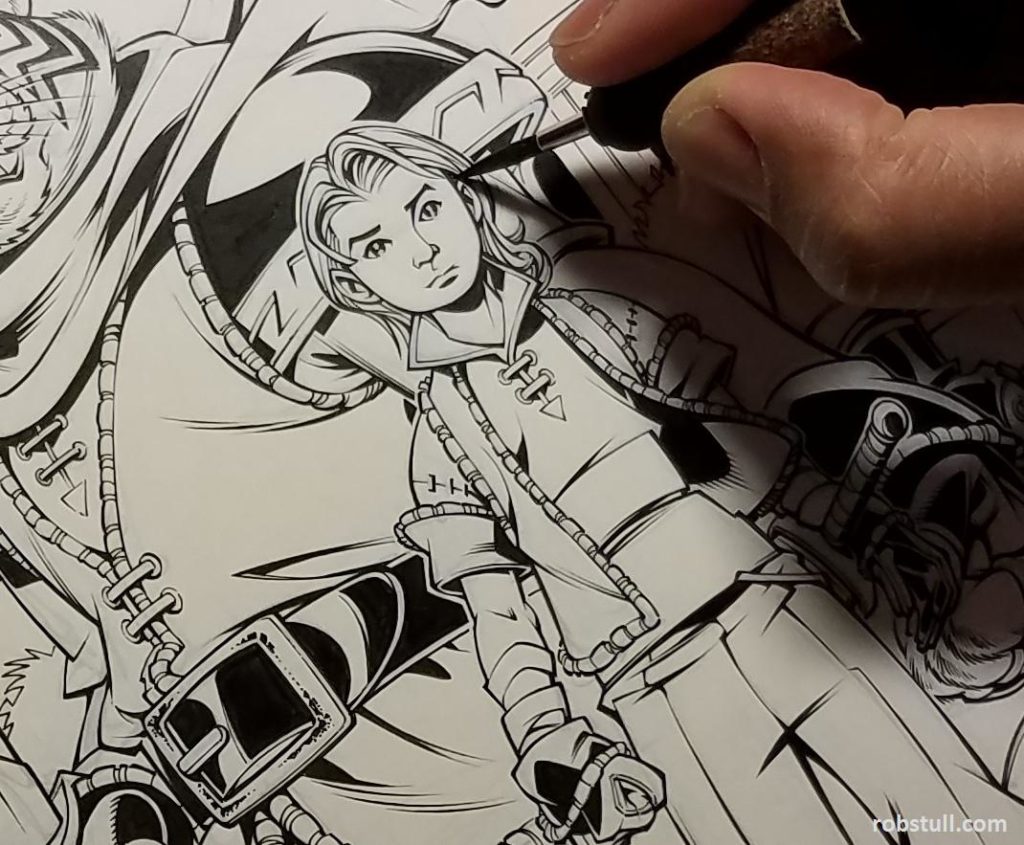 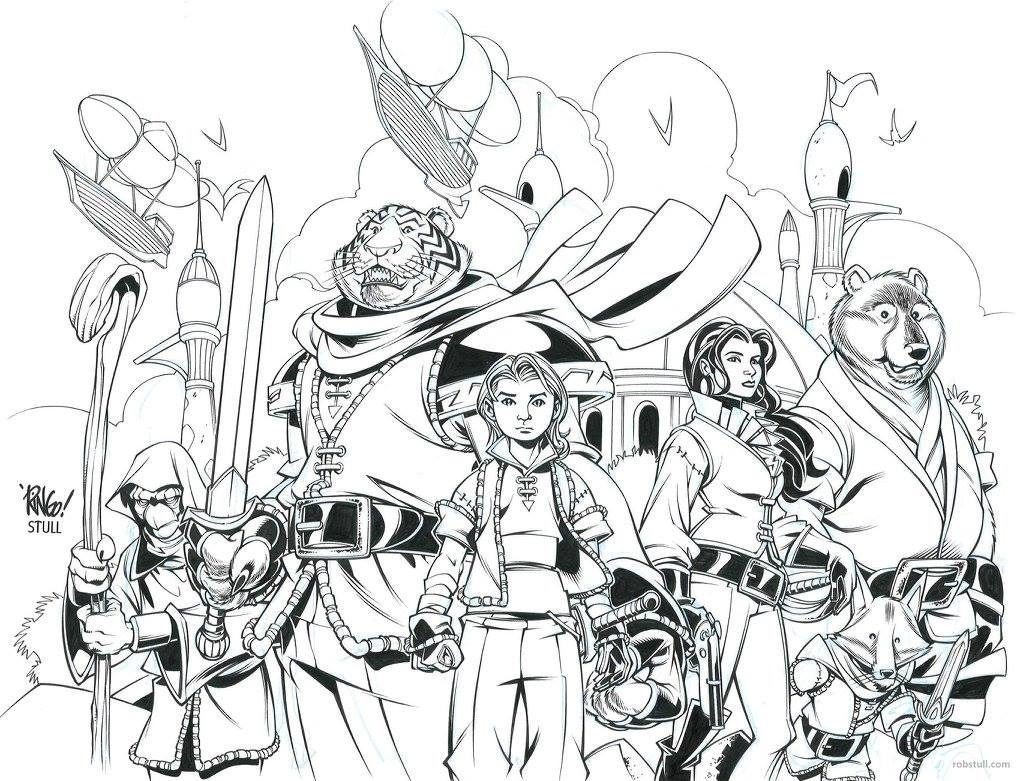 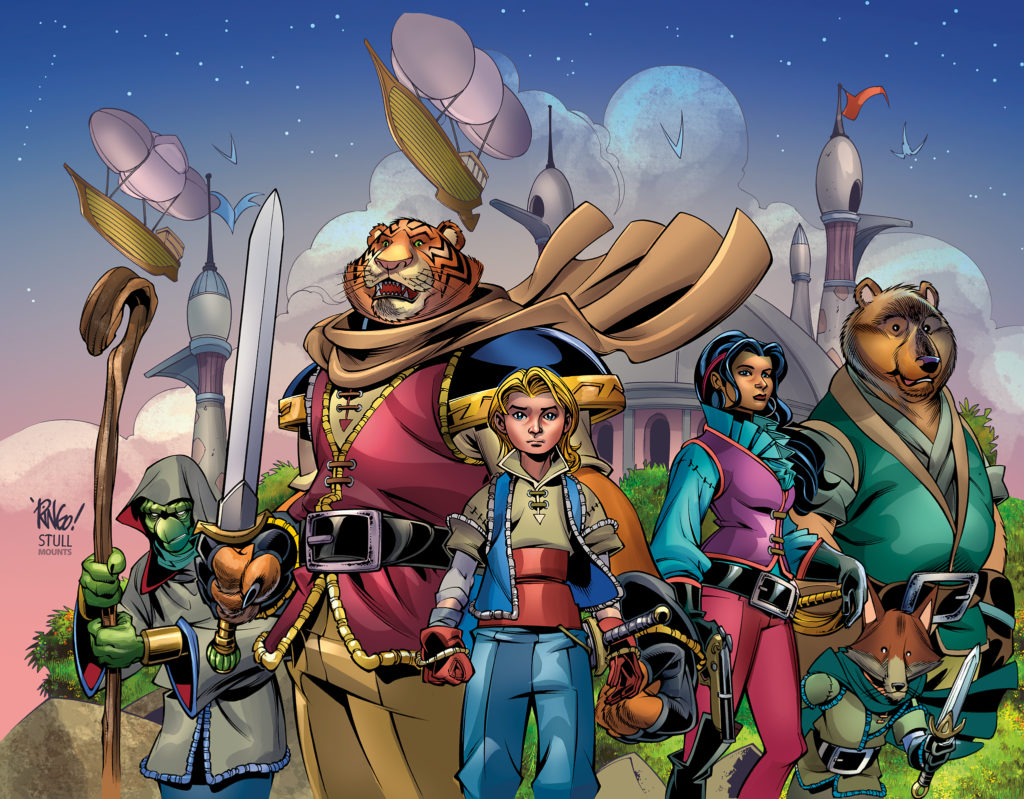 During the 2017 convention season, both Heroes Con and Baltimore Comic Con provided special programing to celebrate the launch of The Mike Wieringo Tellos Tribute. 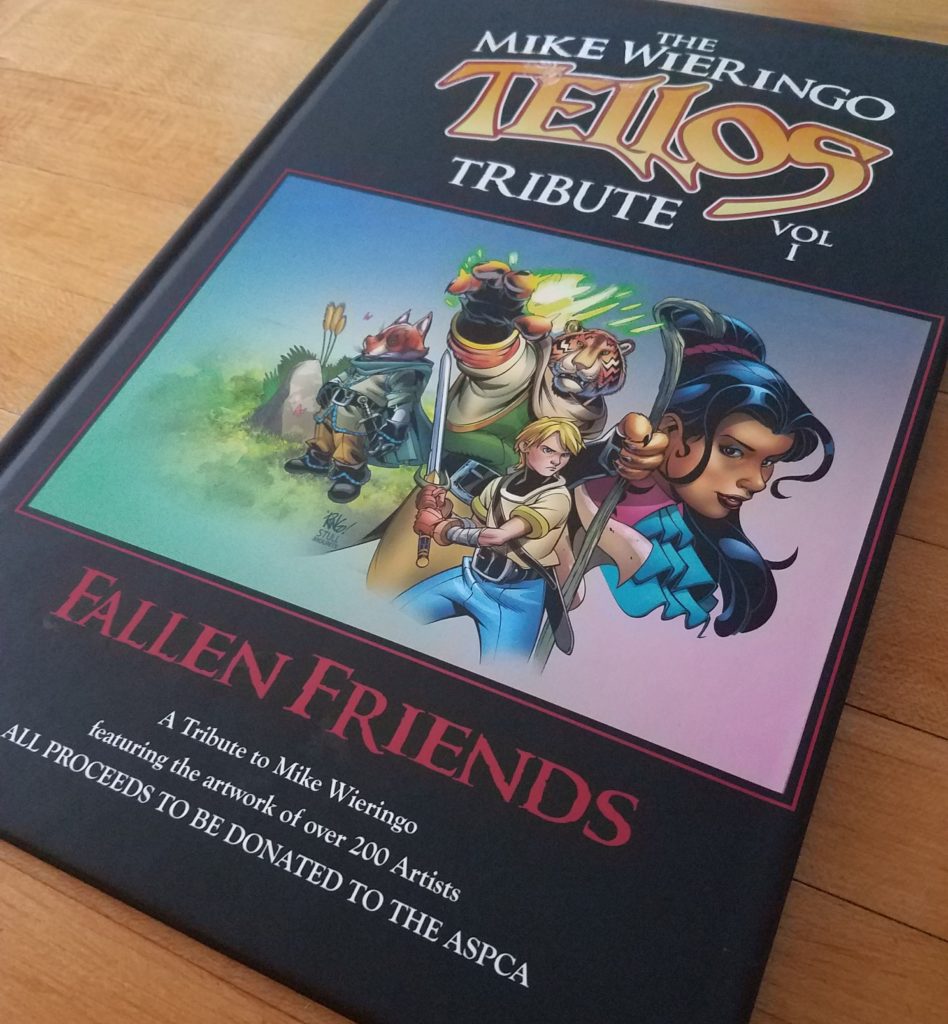 The Baltimore Comic Con publishes an annual full color, hardbound book featuring the work of the artists attending the show. The theme for 2017 was TELLOS and featured awesome cover art by Mike’s brother Matt Wieringo. 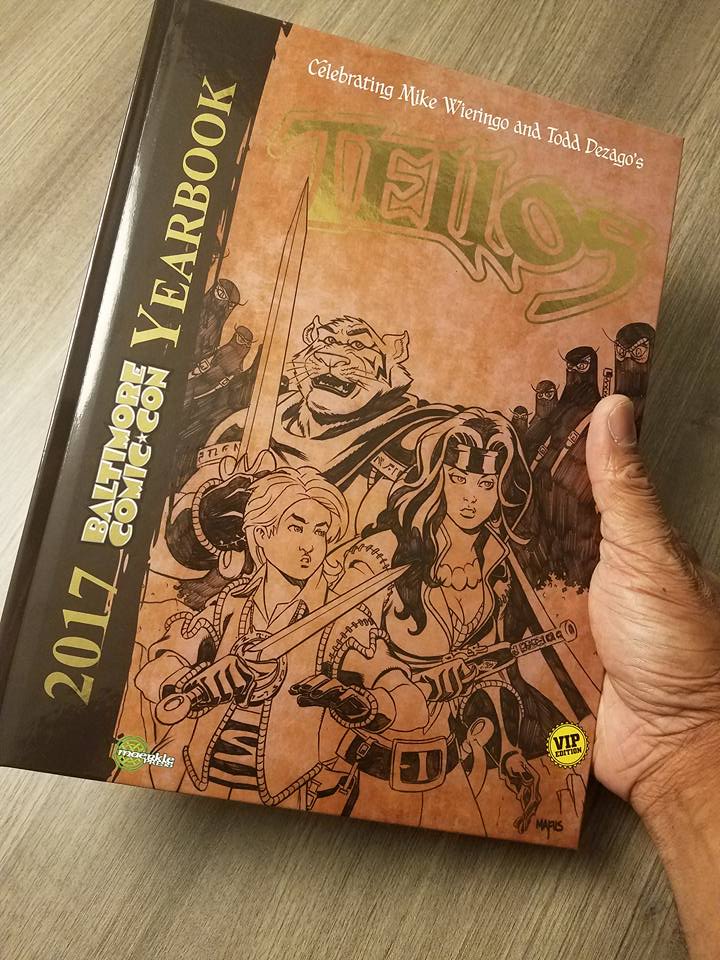 My contribution to the 2017 Baltimore Comic Con Yearbook. 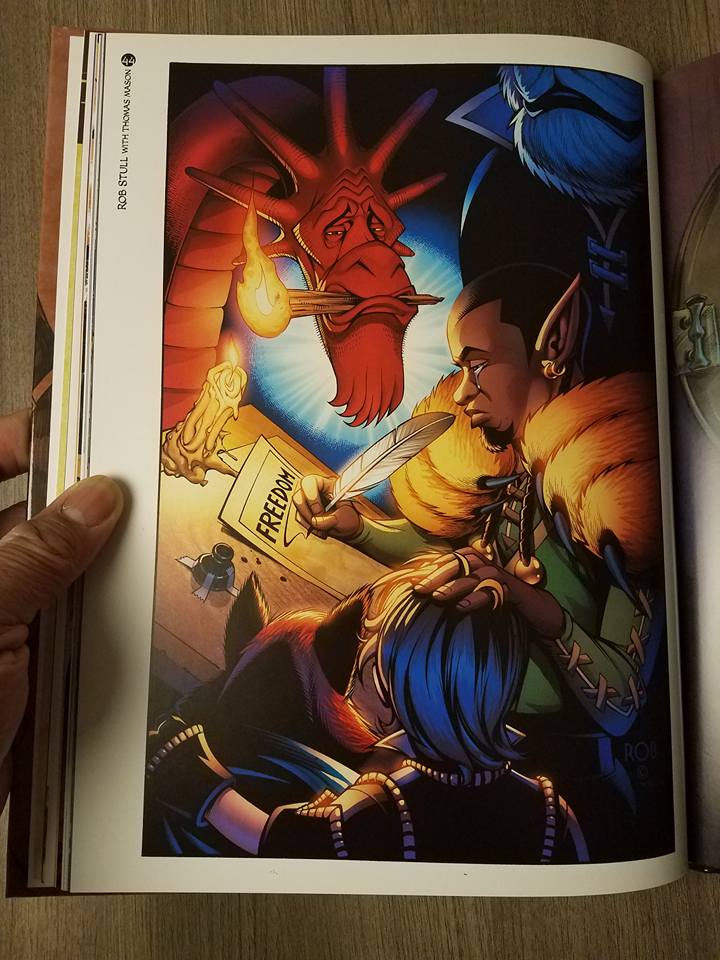 Several artists and contributors attended the shows and participated in the official Mike Wieringo Tellos Tribute panel and book signing. 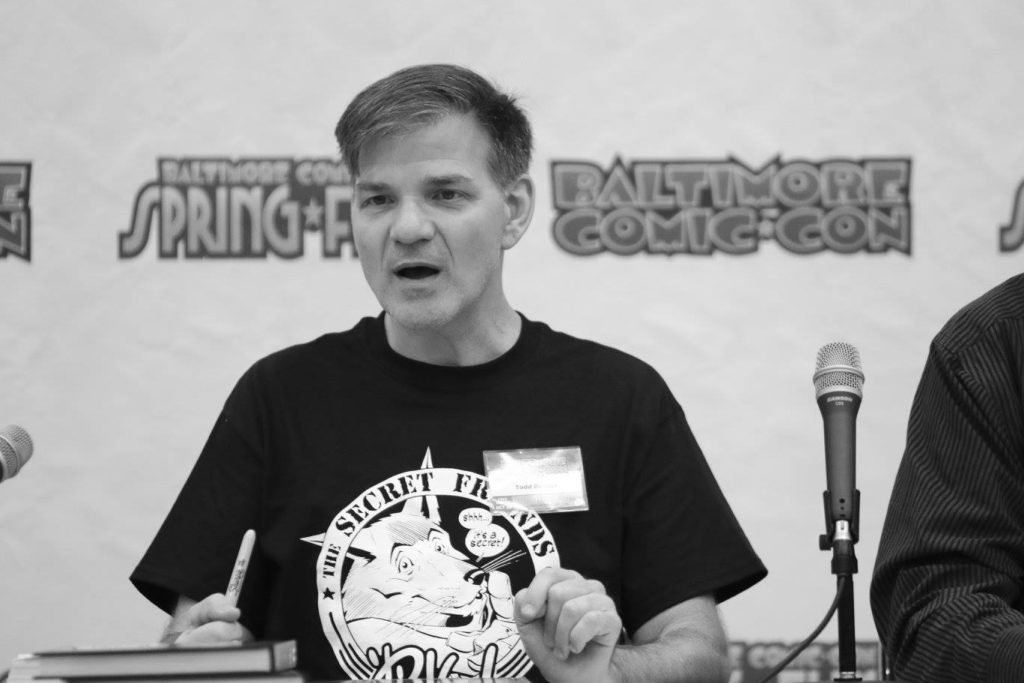 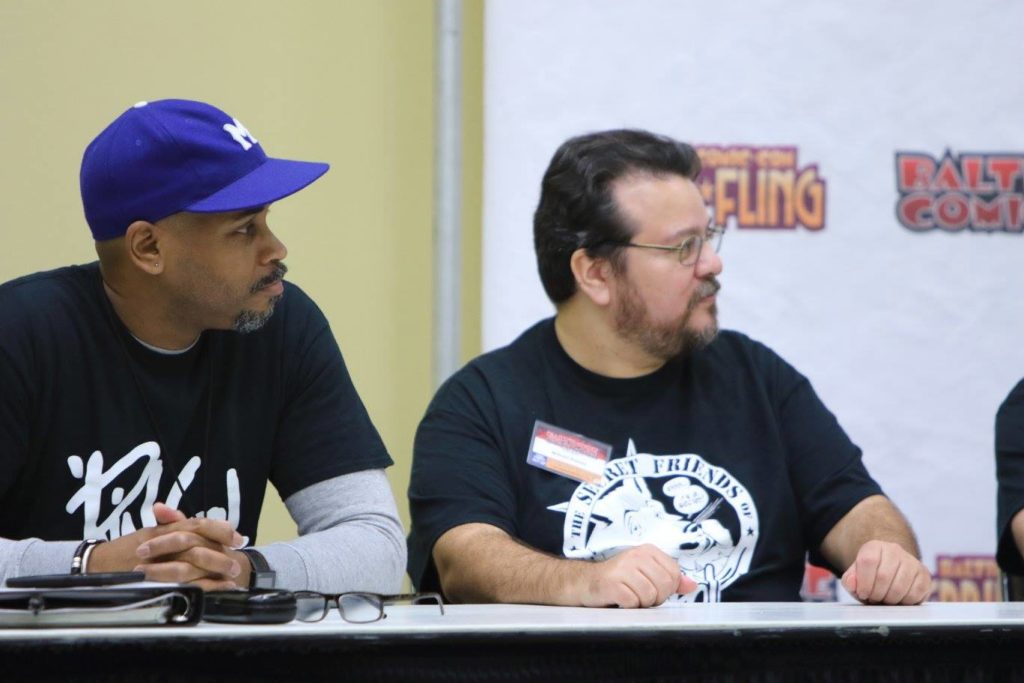 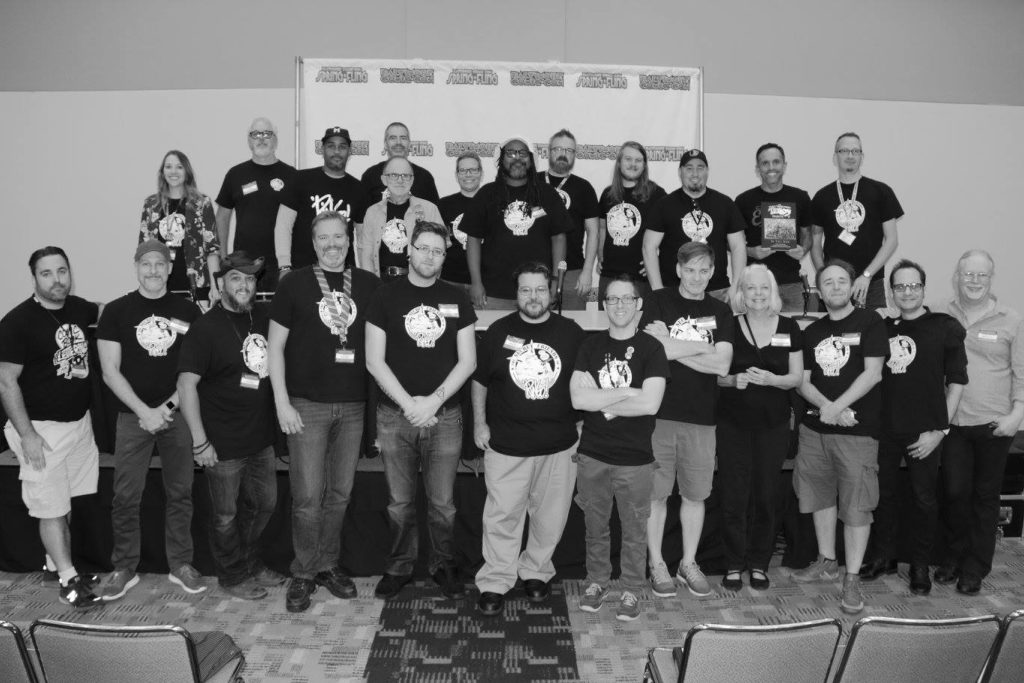 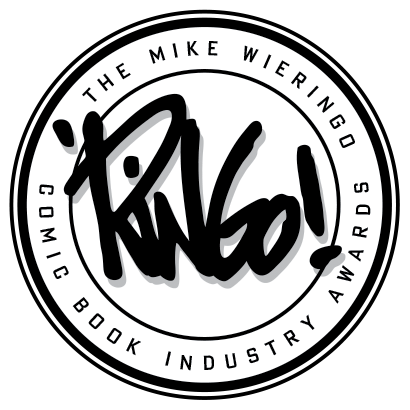 The Mike Wieringo Tellos Tribute volume 2 cover art was used as the face of  the RINGO awards! 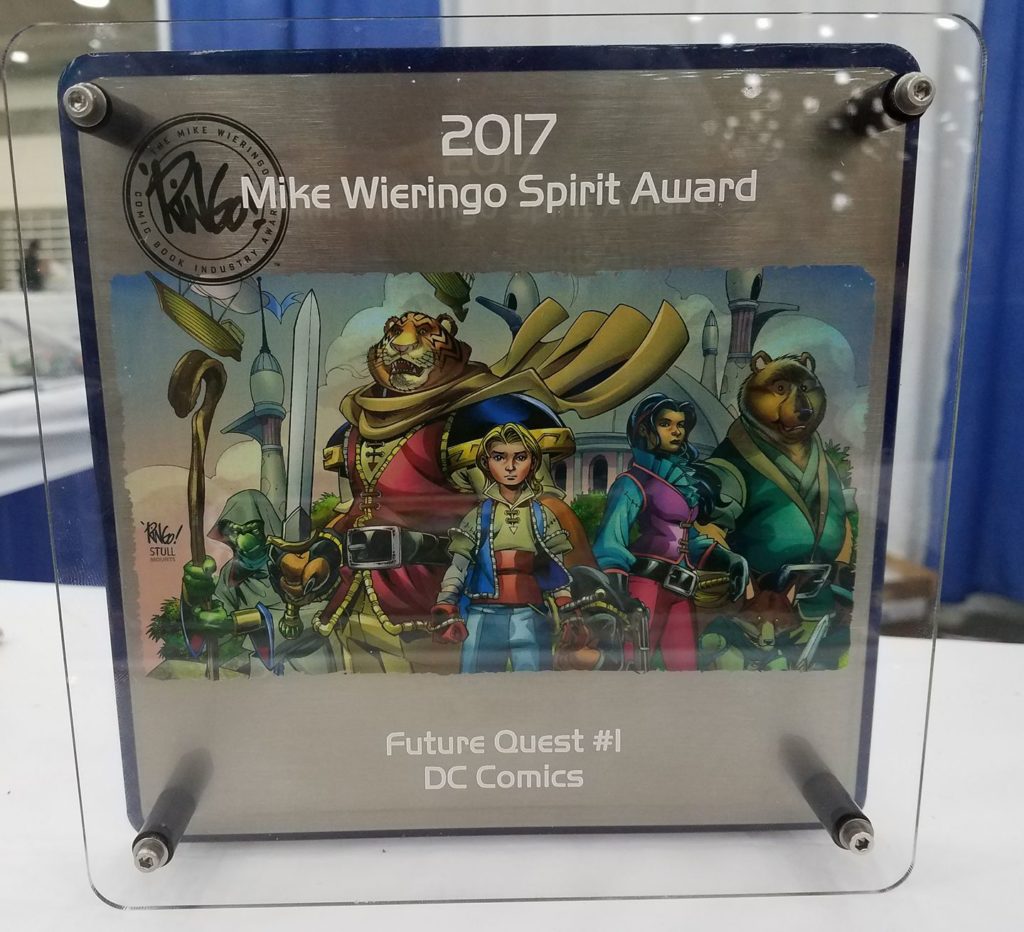 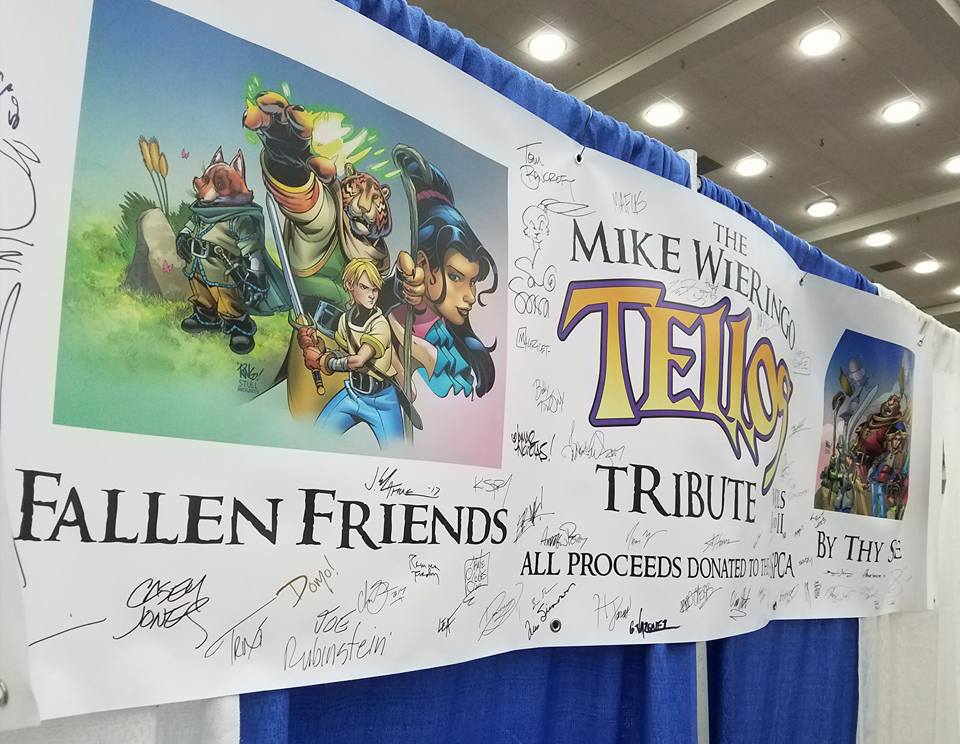 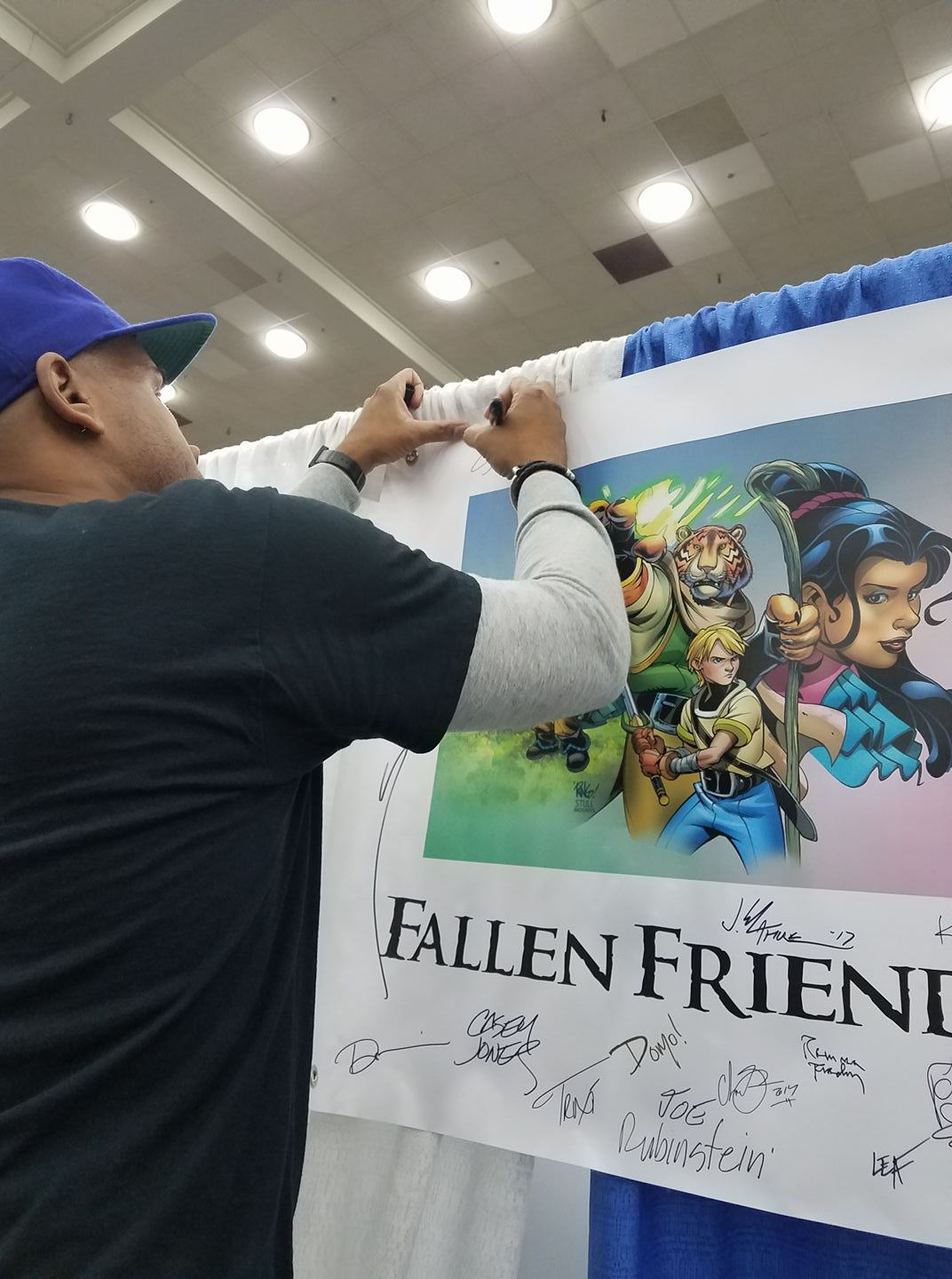 We did it RINGO! Happy New Year brother!

Much Love and Respect always,

AHOY and Welcome to the MIKE WIERINGO TELLOS Tribute